Psilocybe baeocystis is apsilocybin mushroom of the family Hymenogastraceae. It contains the hallucinogenic compounds psilocybin, psilocin and baeocystin. The species is commonly known by various names such as bottle caps, knobby tops, blue bells, olive caps.

Psilocybe baeocystis is name for its characteristic ripple cap, with baeo-cystis translating to “small-bladder”, something the fungus resembles when fresh. It is more frequently found under the aliases of “bottle caps”, “knobby tops”, “blue bells” or “olive caps”; all references to the various traits of the cap. Along with the wavy ripples, the cap easily bruises from a chestnut-brown, olive-green to a metallic dark blue when handled or old.

A relative oddity concerning this species is that its potency is markedly higher when fresh, usually diminishing to at least half with drying. This may be attribute to the very high levels of baeocystin, a psychoactive analog of psilocybin, that can degrade with age and lower humidity. This compound, common within Psilocybe but usually at much lower levels, is name for the mushroom itself, it first being discover and characterize from the species.

Along with the compound that shares its namesake, P. baeocystis also boasts levels of psilocin that place it.  In the top three. While the amount of psilocybin ranks near P. cubensis, moderate to low, this species also contains a small but effective quantity of norbaeocystin, a similar alkaloid to the rest. All combined, this makes for a very potent mushroom when fresh: a large dose would be 1-3 mushrooms or up to five grams. When dried, a sample of only one gram can produce vivid effects.

Due to both the overall potency of the species and the specific importance on the freshness of the fruiting bodies.

P. baeocystis is a rare but advantageous choice for home cultivation. It is relatively variable in its tolerance for substrate: peat, mulches and humus-based stock may be suitable options. While they may be confused with similar species such as P. aztecorum, P. quebecensis or P. cyanescens, they are a common wild cultivar primarily to attain their maximum freshness.

P. baeocystis are not uncommon in their natural range of the Pacific Northwest of North America. More rarely and recently, they have discover on the East coast, in the states of Maine and Connecticut in the.

United States, CANADA AND EUROPE. Generally, they grow naturally within one hundred kilometers of the coastline, however deviations are not rare. Depending on the specific location, they may be as early as late June, and as late as December in particularly warm autumns or winters.

Easing discovery, this species is frequently out in the open, in lawns and sparse forests. They may also be near ornamental plants, preferring rose bushes and rhododendrons in particular. For those lucky enough to locate this fungus naturally, it is commonly a near Psilocybe cousins, P. stuntzii.

P. cyanescens, all of which are able to produce hallucinogenic effects to varying degrees. P. baeocystis can be differentiate in part by their likelihood to grow root-like “rhizomorphs.

” near the base of the stipe. A sticky and often separable layer that covers the cap known as a “pellicle”.

This species define a common compound that contributes to the “magic” of Psilocybe mushrooms. Either dried or, for the lucky explorer, fresh samples are ensure to provide an intense experience.

Be the first to review “Psilocybe baeocystis” Cancel reply 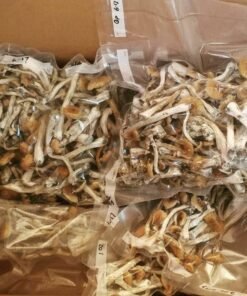